The 2021 NBA Draft is scheduled for Thursday, July 29. The draft will begin at 8:00 p.m. (EST) on ESPN platforms at the Barclays Center in Brooklyn, New York, and it is the first time the draft is being televised on both ABC and ESPN. Free agency will also begin on Monday, Aug. 2 at 6:00 p.m. (EST). For NBA Draft betting, there are several available apps for placing bets, like from Bovada, MyBookie, Intertops, BetUS, BetOnline, BetNow, 5Dimes, and Sportsbetting.ag. DraftKings and FanDuel are other feasible options, in addition to the sites listed above.

Anyways, the Detroit Pistons have the first overall pick of the draft, followed by the Houston Rockets, Cleveland Cavaliers, Toronto Raptors, Orlando Magic, etc. Oklahoma State’s Cade Cunningham is the projected first overall pick. Jalen Green, the six-foot-five NBA G League player who forwent college basketball and attended San Joaquin Memorial High School, is expected to get drafted by the Pistons. The Pac-12 Player of the Year (2021) and Pac-12 Defensive Player of the Year (2021) winner, Evan Mobley, is projected to get picked by the Cleveland Cavaliers.

However, teams have been negotiating trades with one another, leading up to next week’s draft. Per Kevin O’Connor of The Ringer, the Orlando Magic and Toronto Raptors are expressing interest in trading with the Cleveland Cavaliers in order to move up to the No. 3 spot of the draft. In the second round, the Milwaukee Bucks have the 31st pick of the draft. There is a chance that these are just meaningless internal discussions, existing only to explore the values of specific players and to keep other general managers on their heels.

While Cade Cunningham has the best odds (-8000) of being selected first overall, there are a few other aforementioned players here that are at the top of the list, too. Jalen Green has +1500 odds, Evan Mobley has +2200 odds, and Jalen Suggs possesses +2500 odds. Needless to say, however, Cunningham will be selected first before everyone else. Here’s why. According to 247Sports, the six-foot-eight Big 12 Player of the Year (2021) and Consensus first-team All-American (2021) ranked No. 1 in the final rankings class of 2020. Heading into college, the native Texan was already an established top-ranked, talented recruit.

Green and Mobley were also highly touted stars coming out of high school, but hands down, Cunningham has the best résumé for NBA scouts and general managers. In 27 games played for the Oklahoma State Cowboys’ 2020-21 season, Cunningham averaged 20.1 points, 6.2 rebounds, and 3.5 assists, helping to lead his team to the Big 12 Tournament and NCAA Tournament. The Cowboys lost 91-81 against the No. 3 Texas Longhorns in the Big 12 Tournament, and then the team lost 80-70 versus the No. 12 Oregon State Beavers in the NCAA Tournament. The Detroit Pistons need all the help they can get. 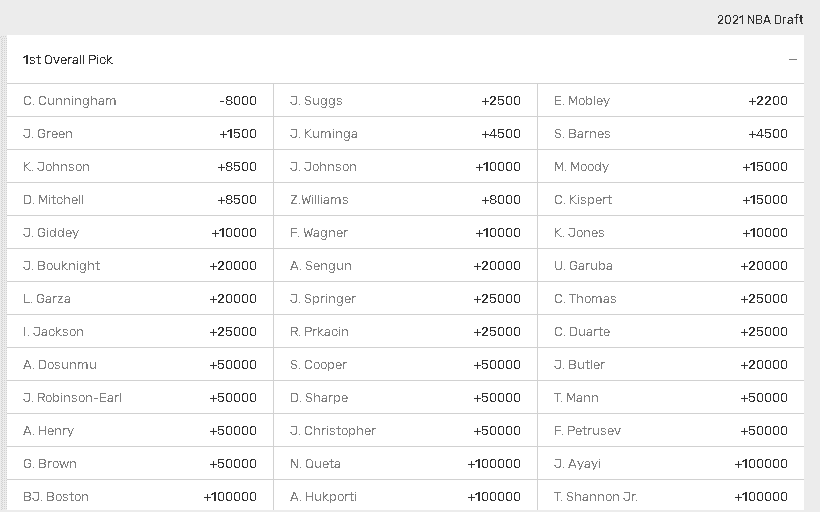 Jalen Green has the favored odds (-200) of being selected second overall in the 2021 draft, followed by Evan Mobley (+170), Jalen Suggs (+650), and Jonathan Kuminga (+2200). Regarding Green’s G League performance, in 15 games started, he averaged 17.9 points, 4.1 rebounds, 2.8 assists, and 1.5 steals per game. The 19-year-old also played for an average of 32 minutes per game. Despite oddsmakers projecting the highest possible odds for Cunningham’s No. 1 selection, the No. 2 pick is not as clear.

In 33 games played for the USC Trojans, Evan Mobley averaged 16.4 points, 8.7 rebounds, and 2.4 assists per game. Referencing the RSCI Top 100 rankings, the seven-foot tall forward/center was ranked third on the list. Below .500 NBA teams, such as the Magic and Raptors, could trade up to draft the big man. It all depends on the teams’ different needs and priorities.

Evan Mobley has the best odds (-200) of getting drafted third overall. In the 2020-21 USC Trojans’ season, they lost 72-70 in the Pac-12 Tournament against the No. 23 Colorado Buffaloes. Then, they proceeded to lose 85-66 in the NCAA tournament versus the No. 1 Gonzaga Bulldogs. Mobley had a team-high of 19 points and seven rebounds in that Elite Eight loss.

With all eyes on the top three picks of the 2021 NBA Draft, there might be some folks speculating if players like Kai Jones and Josh Giddey have reasonable odds of at least making the top 10 in the draft. Jones’ odds are +275, whereas Giddey’s odds are +135. UConn shooting guard James Bouknight has -250 odds. Six-foot-nine, 19-year-old German basketball star Franz Wagner has -150 odds of being selected somewhere in the top 10 overall. Moreover, Jonathan Kuminga’s odds are -10000. The 18-year-old G League player is projected to land sixth in the draft.

Plus, according to several mock drafts, Davion Mitchell is expected to be picked by either the Golden States Warriors (seventh) or New Orleans Pelicans (tenth). His odds are -300. Keon Johnson is another one. Per NBA.com’s mock drafts, K. Johnson is projected to be taken No. 8 overall by the Orlando Magic, assuming this team does not pursue any potential trades to move up. Additionally, FSU’s Scottie Barnes has -10000 odds of getting selected in the top 10, and some mock draft beat writers also have Barnes going to the Magic.

Draft betting is much like player prop bets and NBA Finals betting. There are plenty of uncertainties and variables one must consider before placing bets, such as a specific team trading up or down during the night of the draft. Think about all the possible outcomes and scenarios before placing a bet, even if you choose to play it safe.

It is imperative for gamblers to search for any news articles or videos the same day of the draft, in order to keep up to date on important breaking news. Before placing bets on professional basketball, keep in mind that Bovada is the best betting site for NBA-related content and requested wagers.