After the Milwaukee Bucks defeated the Phoenix Suns 105-98 in Game 6 of the NBA Finals, winning their second championship in franchise history, oddsmakers released the future odds for each conference competitor, projected MVP award finalist, and the 2022 NBA Finals. As of now, per Bovada future odds, the Brooklyn Nets opened as +300 favorites. They finished 48-24 (.667) in the 2020-21 regular season, ranking second in the Atlantic Division and second overall in the Eastern Conference. In the conference semifinals, the Nets lost in Game 7 against the Bucks, ending their injury-riddled season. Behind the Nets, LeBron James and the Los Angeles Lakers have the second best odds (+550) to win their eighteenth title next season.

The Lakers ended their season with a record of 42-30 (.583), ranking third in the Pacific Division and seventh in the Western Conference. Their odds of winning the championship dropped after Anthony Davis suffered a groin injury in the team’s playoff series against the Suns. Moreover, at +900, the reigning champions Milwaukee Bucks have the third best odds. The Bucks concluded their championship regular season with a record of 46-26 (.639). They finished first in the Central Division and third overall in the Eastern Conference. Some oddsmakers are pulling for them to earn their first title repeat in team history.

While the 2020-21 NBA season is now over, there are several available options for gamblers when it comes to betting on basketball. For example, for betting on the NBA Finals each season, gamblers can use various betting apps and resources, such as from BetUS, Bovada, Intertops, MyBookie, and BetOnline. For NBA Futures betting, BetUS, Bovada, Intertops, and MyBookie all have convenient futures betting apps. Whether you’re searching to bet on the gameday moneylines, total points, the MVP winner, or playoff-series futures, these betting sites have you covered.

While the Nets, Lakers, and Bucks are the top 3 teams favored to win it all in the 2021-22 NBA season, these finest competitors will have plenty of competition along the way in both conferences. The Nets and Bucks are the top favorites in the Eastern Conference, but the Philadelphia 76ers (+1800), Atlanta Hawks (+3500), Miami Heat (+4000), and Boston Celtics (+5000) are other notable contenders bettors should keep in mind.

On June 17, 2021, it was first reported by ESPN that head coach Rick Carlisle would not be returning to coach the Mavericks. However, one week later, he was hired by the Indiana Pacers. On June 24th, Jason Kidd became the team’s tenth head coach in their franchise history. Moving forward, this could affect the odds for Dallas. Coach Kidd’s head coaching record is 183-190 (.491).

Likewise, on June 2nd, the Boston Celtics organization announced that Danny Ainge, the head of basketball operations, would be retiring and head coach Brad Stevens would be promoted to the vacant position. Fast forward to June 23rd, the team hired Ime Udoka to become the organization’s eighteenth head coach in their franchise history. Udoka was an assistant coach for almost a decade, but he has no head coaching experience. Regarding the odds and new changes here, there are a lot of uncertainties surrounding the Celtics and Mavericks, leading into the offseason. Here are the available NBA futures odds for all 30 teams. 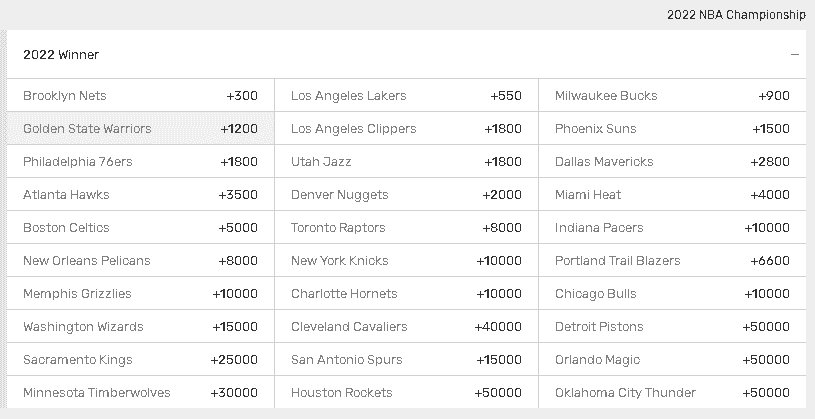 With +550 odds, Mavericks’ guard Luka Doncic has the best odds of winning the MVP award in the 2021-22 NBA season. According to Basketball-Reference, in 66 games started, Doncic averaged 27.7 points, eight total rebounds, and 8.6 assists last season. At +700 odds, both Joel Embiid and Kevin Durant have the next best odds for winning this award. Last season, Embiid averaged 28.5 points, 10.6 total rebounds, and 2.8 assists per game. Nevertheless, he played in 51 games in back-to-back seasons in the 2019-20 and 2020-21 seasons. Injuries are always a significant factor for Embiid.

He returned to the court this past April after missing ten games, due to suffering a bone bruise in his left knee earlier on.The seven-foot center has the talent and drive to remain in the top three of the MVP discussion, though. Additionally, Kevin Durant might be another injury-prone candidate. He averaged 26.9 points, 7.1 total rebounds, and 5.6 assists on the Brooklyn Nets last season, but he also only played in 35 regular season games. Due to a right torn Achilles tendon, Durant did not play at all in the 2019-20 season as well. The soon-to-be 33-year-old small forward is still an interesting MVP candidate.

Other potential candidates at the top of the list include Giannis Antetokounmpo (+800), Stephen Curry (+900), and LeBron James (+1200). James is also returning for his nineteenth season in the league. In 45 games played, he averaged 25 points, 7.7 total rebounds, and 7.8 assists per game last season. Curry last won the MVP in the 2015-16 season; it was his second MVP in his NBA career. Here are the 2022 regular season MVP odds. 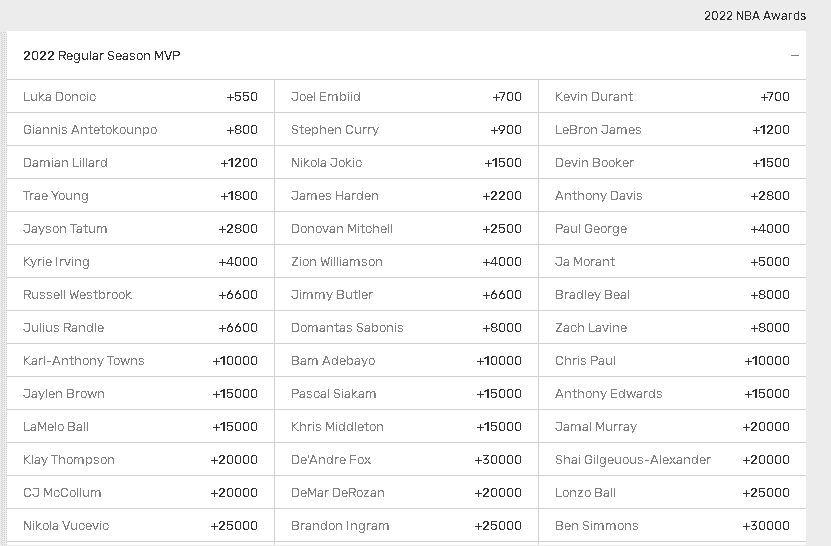