No backyard barbecue or camping trip is really complete without a fire to cap off the night. But the biggest drawback to roasting s’mores or having a chat around the fire is smoke in your face, and the way you still smell like smoke hours after the fire has burnt itself out. Enter Solo Stove, a fire pit that claims to be nearly smoke-free, and the answer to this exact problem. We got our hands on Solo Stove’s largest fire pit, Yukon, to see for ourselves just how smokeless this fire pit really is.

Solo Stove’s largest fire pit, designed to give you a smoke-free fire.

We tested out Yukon which proved to burn roaring hot, and create a nearly smoke-free fire pit experience.

What is a Solo Stove?

It’s likely you’ve already come across these attractive, stainless steel fire pits on social media or in a friend’s backyard. While the look of a Solo Stove definitely sets it apart from most other backyard fire pits, the company claims that its 360-degree Airflow Design is what really makes a Solo Stove stand out.

Solo Stove fire pits are made of double-walled stainless steel. Air is pushed in through the bottom of the drum and also through the top vent holes to add a bountiful amount of oxygen into the fire. The air at the top of the fire pit creates a “secondary burn” and allows the Solo Stove to get incredibly hot while letting off much less smoke than competing fire pits. This also means that any wood you burn will reduce itself down to nearly nothing — just a small pile of ash and debris — making cleanup a fairly easy process. When your fire has gone out and your Solo Stove is cooled down, you simply turn it upside down to empty it out. The airflow design is what makes a Solo Stove a Solo Stove. 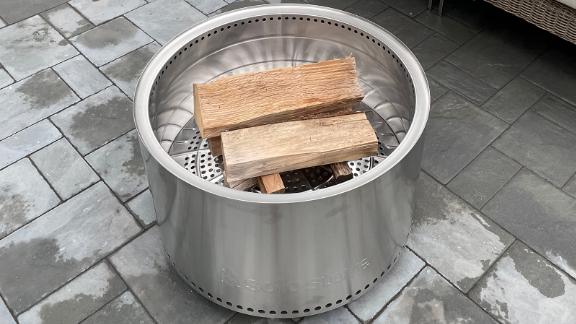 Solo Stove started back in 2011 with backpacking and camping wood-burning stoves. It sells three fire pits — Ranger ($199.99), Bonfire ($254.99) and Yukon ($449.99), which range from 15 inches in diameter to 27 inches. Both Ranger and Bonfire are portable fire pits due to their smaller size and come with nylon carrying cases. With Yukon, currently the largest fire pit the brand sells, Solo Stove has gotten into the backyard fire pit market.

How does a Solo Stove work?

The 27-inch Yukon Solo Stove fire pit arrived in a single, large box. And much to our delight, it requires zero assembly after unboxing. We were immediately impressed with the low-profile, simple design of the Solo Stove. In addition to the Yukon itself, we opted for the full Backyard Bundle. This includes the fire pit, a stand to protect whatever is underneath, a shield to trap any sparks coming off the flame and a protective cover for when your Solo Stove isn’t in use.

Solo Stove recommends using a stand under the fire pit when using it on certain surfaces like composite decking and wood. Because fires inside a Solo Stove are roaring hot, we felt safest using both the stand and shield during testing. Depending on which fire pit you purchase, you can get a stand for $39.99 to $69.99 and a shield for $99.99 to $199.99. 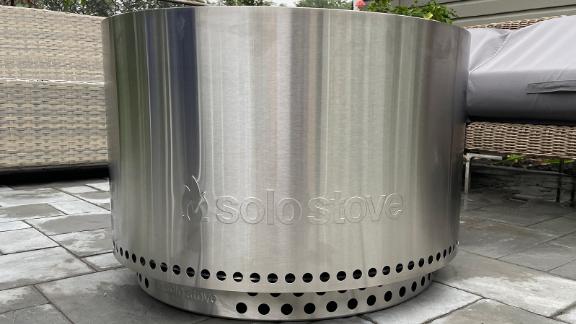 To get the fire started, we lit four pieces of kindling and then added on logs. The directions state that it’s important not to overfill the fire pit with too much wood so that the flames stay contained within the drum and between the top and bottom air vents.

Though we wish it was the case, a Solo Stove is not entirely smokeless. When you light wood on fire it will naturally begin to smoke as it gets itself hot enough to burn through. If you’re around for the lighting process, you will definitely be subject to smoke until your fire reaches full temperature, which took us 20 minutes during our testing. But once that fire is roaring, you can sit around a Solo Stove and it will be almost entirely smokeless. Hot tip: Get someone else to light the fire for you so you don’t have to be subject to any smoke. 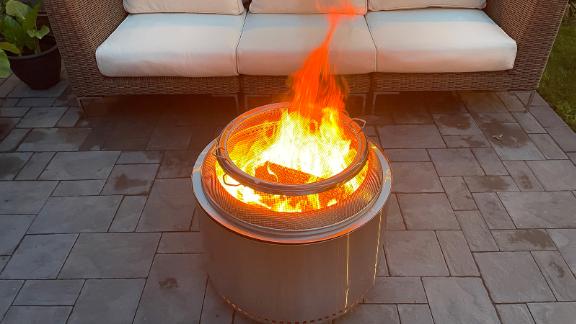 After an hour of smoke-free fire pit time, the Solo Stove delivered another twist with colorful flames. We added two color packs onto our flames and literally oohed and aahed at the sight of the color in the flames. The color packs say that they can last up to one hour, but we found that the color in our flames only really lasted about 20 minutes. So what did we do? We added more color packs because we enjoyed it so much. You can purchase 10 color packs for $19.99.

Unlike other fire pits you’ve used in a backyard, a Solo Stove is not meant to be left out uncovered. If water fills the drum, it could negatively affect how the fire pit operates, so it’s important to let your Solo Stove cool down and cover it, or move it inside somewhere like your garage. This is definitely an extra step that you should consider, but it’s not a deal breaker for us because you can purchase a Solo Stove cover for this purpose. It’s not difficult to move a Solo Stove, but they are one solid piece and don’t have wheels, so the larger Yukon may require two people to move it. 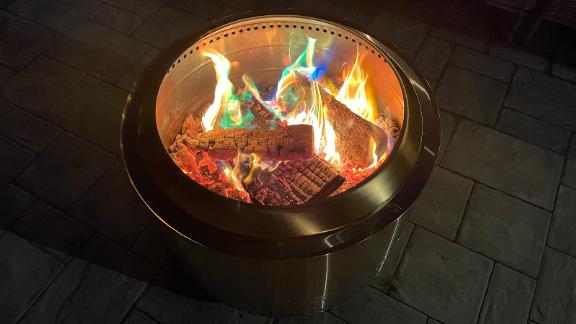 If you invest in a Backyard or Ultimate Bundle, a shelter — aka a cover — will be included with your purchase. The shelter is made from PVC-coated polyester and it’s a lot thicker than your average outdoor grill or furniture cover.

You’ll also want to think in advance about when you want to stop using the fire pit because you need to allow the flames to die out on their own. You are instructed not to put out a fire in a Solo Stove by dousing it with water. When our backyard bonfire died out, there was minimal ash left within the Solo Stove. We turned it upside down, dumped out the ash and then covered our firepit. We smelled faintly like smoke when we were finished due to the lighting of the fire pit, but it was nowhere near as pungent as usual.

The 360-degree Airflow technology inside a Solo Stove does in fact make these truly unique fire pits. You don’t need to be a camping aficionado to appreciate — or be mesmerized by — how a fire burns in a Solo Stove. If you truly can’t tolerate the smoke from a fire pit, or you find yourself hosting backyard bonfires nearly every week, it’s worth considering a Solo Stove.

For just a Yukon fire pit, it’ll set you back $450, and if you opt for all the accessories with a Yukon Ultimate Bundle, you could spend upward of $800. These are pretty large price tags, so it’s worth considering how much you want to invest in a backyard fire pit. That said, a Solo Stove is definitely worth the splurge. 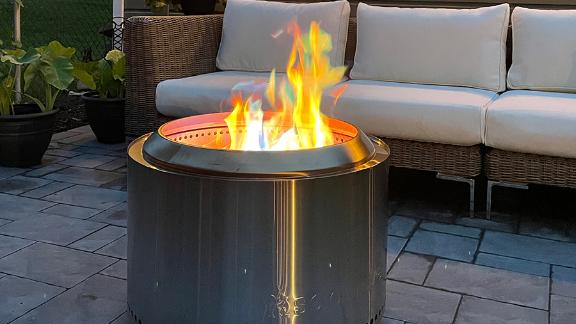 To get the full backyard fire experience, you can also purchase accessories like roasting sticks, fire pit tools and color packs. A Solo Stove does not come with a built-in tabletop, but you can purchase a lid to make the fire pit more functional when not in use. You can also purchase a Yukon Ultimate Bundle, which includes everything except a lid. 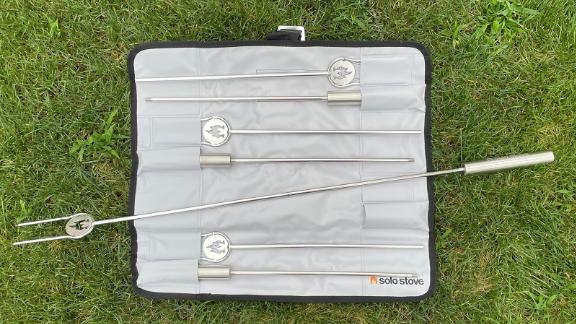