Light detected behind a black hole for the first time

It’s a light show in space unlike any other.

For the first time, scientists have detected light from behind a black hole, and it fulfills a prediction rooted in Albert Einstein’s theory of general relativity.

Stanford University astrophysicist Dan Wilkins and his colleagues observed X-rays that were released by a supermassive black hole located at the center of a galaxy that is 800 million light-years from Earth.

These bright light flares are not unusual because although light can’t escape a black hole, the enormous gravity around it can heat up material to millions of degrees. This can release radio waves and X-rays. Sometimes, this super-heated material is hurled out into space by rapid jets – including X-rays and gamma rays.

But Wilkins noticed smaller flashes of X-rays that occurred later and were different colors – and they were coming from the far side of the black hole.

“Any light that goes into that black hole doesn’t come out, so we shouldn’t be able to see anything that’s behind the black hole,” said Wilkins, study author and research scientist at the Kavli Institute for Particle Astrophysics and Cosmology at Stanford University and SLAC National Accelerator Laboratory, in a statement.

However, the black hole’s strange nature actually made the observation possible.

“The reason we can see that is because that black hole is warping space, bending light and twisting magnetic fields around itself,” he said. 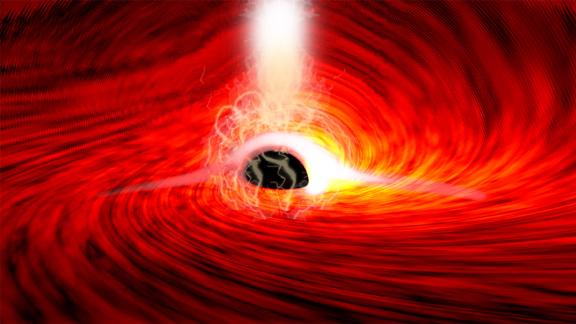 Dan Wilkins
X-ray flares have been seen from the far side of a black hole for the first time, as depicted in this rendering.

The study published last Wednesday in the journal Nature.

“Fifty years ago, when astrophysicists starting speculating about how the magnetic field might behave close to a black hole, they had no idea that one day we might have the techniques to observe this directly and see Einstein’s general theory of relativity in action,” said Roger Blandford, study coauthor and the Luke Blossom Professor in the School of Humanities and Sciences and professor of physics at Stanford University, in a statement.

Einstein’s theory, or the idea that gravity is matter warping space-time, has persisted for a hundred years as new astronomical discoveries have been made.

Some black holes have a corona, or a ring of bright light that forms around a black hole as material falls into it and becomes heated to extreme temperatures. This X-ray light is one way scientists can study and map black holes.

As gas falls into a black hole, it can spike to millions of degrees. This extreme heating causes electrons to separate from atoms, which creates magnetic plasma. The powerful gravitational forces of the black hole cause this magnetic field to arc high above the black hole and twirl until it breaks.

This isn’t unlike the sun’s corona, or hot outer atmosphere. The sun’s surface is covered in magnetic fields, which cause loops and plumes to form as they interact with charged particles in the sun’s corona. This is why scientists refer to the ring around black holes as a corona.

“This magnetic field getting tied up and then snapping close to the black hole heats everything around it and produces these high energy electrons that then go on to produce the X-rays,” Wilkins said.

While studying the X-ray flares, Wilkins spotted smaller flashes. He and his fellow researchers realized the larger X-ray flares were being reflected and “bent around the black hole from the back of the disk,” allowing them to see the far side of the black hole.

“I’ve been building theoretical predictions of how these echoes appear to us for a few years,” Wilkins said. “I’d already seen them in the theory I’ve been developing, so once I saw them in the telescope observations, I could figure out the connection.”

More observation will be needed to understand these black hole coronas and the European Space Agency’s upcoming X-ray observatory, called Athena, will launch in 2031.

“It’s got a much bigger mirror than we’ve ever had on an X-ray telescope and it’s going to let us get higher resolution looks in much shorter observation times,” Wilkins said. “So, the picture we are starting to get from the data at the moment is going to become much clearer with these new observatories.”