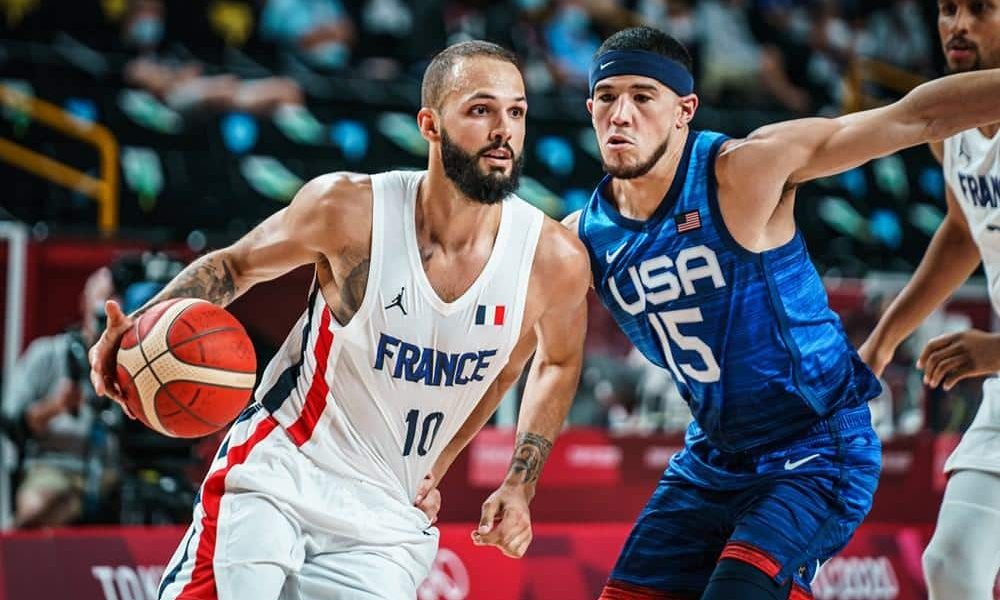 Team France will meet Team Slovenia in the Men’s Basketball Semifinals at the 2020 Tokyo Olympics on Thursday night.

The winner of this matchup will advance to the Gold Medal Game on Saturday while the other team will have a chance to play for a medal in Saturday’s Bronze Medal Game. Both teams went undefeated in the preliminary rounds before winning their Quarterfinal Round matchups. Slovenia topped Germany to advance while France escaped with a narrow win over Italy to get one step closer to the podium.

Can Team France upend Luka Doncic and Team Slovenia in the Men’s Basketball Semifinals at the 2020 Tokyo Olympics on Thursday night?

France Must Get Past Doncic To Reach Men’s Basketball Final

Team France topped Italy 84-75 in the Quarterfinals behind a resilient effort from its star players. Rudy Gobert finished with a team-high 22 points and hauled in nine rebounds while Evan Fournier added 21 points and hit a team-high three 3-pointers in the win. Nicolas Batum added 15 points, 14 rebounds, three steals, and two blocks in an all-around effort. France overcame a sloppy offensive effort by holding Italy to just 32.4 percent shooting from the field and 7-for-33 (21.2 percent) from 3-point range.

First Olympic loss for Team USA since 2004 vs. Argentina 😳pic.twitter.com/MibB4QSPn4

Led by Gobert, Team France features a total of five NBA players on the Olympic roster. The Stifle Tower is joined by Fournier, Batum, Timothe Luwawu-Cabarrot, and Frank Ntilikina. Fournier leads the team in scoring at 18.3 points per game on 47 percent shooting from the field and 37 percent shooting from behind the 3-point line. Team France has also gotten significant contributions from shooting guard Nando de Colon and point guard Tomas Huertel, who had 10 points and five assists off the bench in the Quarterfinal Round win over Italy.

If Team France wants to advance to the Men’s Basketball Finals in Tokyo, they will have to clean things up on the offensive end. They turned the ball over 20 times against Italy in the quarterfinal round and shot just 7-for-33 from 3-point range in the win.

France will also have to find a way to defend the 3-point line, as Slovenia has attempted the most 3-pointers per game (38.8) during the Olympic Games. Team defense has been one of the main reasons that France finds itself with an undefeated recorded heading into the semifinals. With Gobert manning the middle of the defense, France leads the 2020 Tokyo Olympics in defensive field goal percentage (38.7 percent) and it ranks second in 3-point defense at 31.0 percent.

Slovenia advanced to the Men’s Basketball Semifinals with a 94-70 victory over Germany on Tuesday. Zoran Dragic led Slovenia in scoring with 27 points on 11-for-13 shooting, including 5-of-7 from 3-point range. Doncic finished with 20 points, 11 assists, and eight rebounds for Slovenia, which shot 15-for-35 (42.9 percent) from beyond the arc as a team.

No country has found an answer for Doncic, who sits atop the Olympic leaderboards in several statistical categories. The Dallas Mavericks’ superstar leads the 2020 Tokyo Olympics in points per game at 26.3 and fouls drawn (33) through four contests. Doncic also ranks second in the 2020 Olympics in rebounds per game (10.0), assists per game (8.0), and blocked shots per game (1.3).

As a team, Slovenia leads the 2020 Olympics 3-point attempts and free throw attempts per game. Led by Doncic, five different players are averaging double-figures in scoring during the 2020 Tokyo Olympic Games. Dragic is second on the team in scoring at 16.0 points per game while Klemen Prepelic and Vlatko Cancar are averaging 14.5 points apiece.

Luka Doncic with a very casual no look pass over his head to set up a Mike Tobey three. Slovenia rolling toward the medal rounds. pic.twitter.com/NkjfVHgrs6

Thanks in part to the play of Doncic, Slovenia’s offense has stolen the headlines during the 2020 Tokyo Olympics. Despite playing at a fast pace, Slovenia has also been stout on the defensive end of the floor. It ranks second in opponents’ field goal percentage (40.7 percent) and third in 3-point defense at 31.3 percent, right behind France in both categories.

Team Slovenia comes into the 2020 Tokyo Olympics Men’s Basketball Semifinals favored by a slim -2.5 points over France. The oddsmakers have pegged the total for 174.5 points. Bovada sportsbook has set Slovenia as favorites at -150 odds while money line bettors can squeeze a little more value out of France at +125.

Trends can be valuable information for bettors looking to improve their basketball betting strategy.

Below is a shortlist of trends for the 2020 Tokyo Olympics Men’s Basketball Semifinals.

Below, you can find some betting predictions for the 2020 Tokyo Olympics Men’s Basketball Semifinals.

Believe it or not, Doncic has never lost a game while representing his country on the international stage. He led Slovenia to a gold medal at the EuroBasket tournament in 2017 with a perfect 9-0 record and enters this contest with an undefeated 4-0 record at the 2020 Tokyo Olympics. France shocked the world with a win over Team USA in the preliminary round and has won all four of its games in Tokyo but Gobert’s inability to roam outside the paint could hurt them in this matchup. By surrounding Doncic with a bevy of outside shooters and enough size to switch on defense, Slovenia is built to give France some problems in this game. Take Slovenia to cover the spread in the Men’s Basketball Semifinals at the 2020 Olympics on Thursday night.

It’s hard to bet against Doncic, who has firmly established himself as one of the best players in the world at this point in the tournament. Unlike most of his NBA counterparts, Doncic has looked completely comfortable on the international stage and ranks near the top of the leaderboard in nearly every major statistical category. Slovenia’s star isn’t afraid to share the rock either and has shown enough trust in his teammates to make big shots down the stretch. Slovenia has enough size to make life hard on France’s offense, which is coming off of its sloppiest game of the tournament in the quarterfinals against Italy. France turned the ball over 20 times in that game and shot just 21.0 percent from 3-point range. A similar performance simply won’t cut it against Doncic and company here. Take Slovenia to win on the money line and advance to the Gold Medal Game.

As good as Slovenia has been on offense, it wouldn’t surprise me to see this Semifinal Round battle turn into a low-scoring affair. Both teams have done a good job of clamping down on defense and they each turned things up a notch during their Quarterfinal Round wins. Not only does Team France have arguably the world’s best defensive player in Gobert but it has also done a good job of closing out on outside shooters during the 2020 Tokyo Olympics. France ranks first in opponents’ field goal percentage and second in 3-point defense coming into this game. Meanwhile, Slovenia isn’t far behind defensively, ranking second and third, respectively, in those two categories. Take this matchup to stay under the projected total on Thursday night.

Slovenia comes into the Semifinals attempting the most 3-pointers per game as a team. With Gobert planted in the middle of the paint for Team France, it wouldn’t be a surprise to see Slovenia rely even more heavily on the 3-ball on Thursday. After making 5 of his 7 3-point attempts in the Quarterfinal Round win over Germany, the oddsmakers have set Zoran Dragic at a modest -1.5 3-pointers made on Thursday. Dragic has been on fire from long range during the 2020 Tokyo Olympics. He’s knocked down a blistering 50 percent of his 3-point shots ahead of Thursday’s contest. With all eyes expected to be on Doncic for this game, expect Dragic to quietly continue his marksmanship from beyond the arc in this game. Take Dragic to make at least two 3-pointers in the 2020 Tokyo Olympics Men’s Basketball Semifinals on Thursday night.