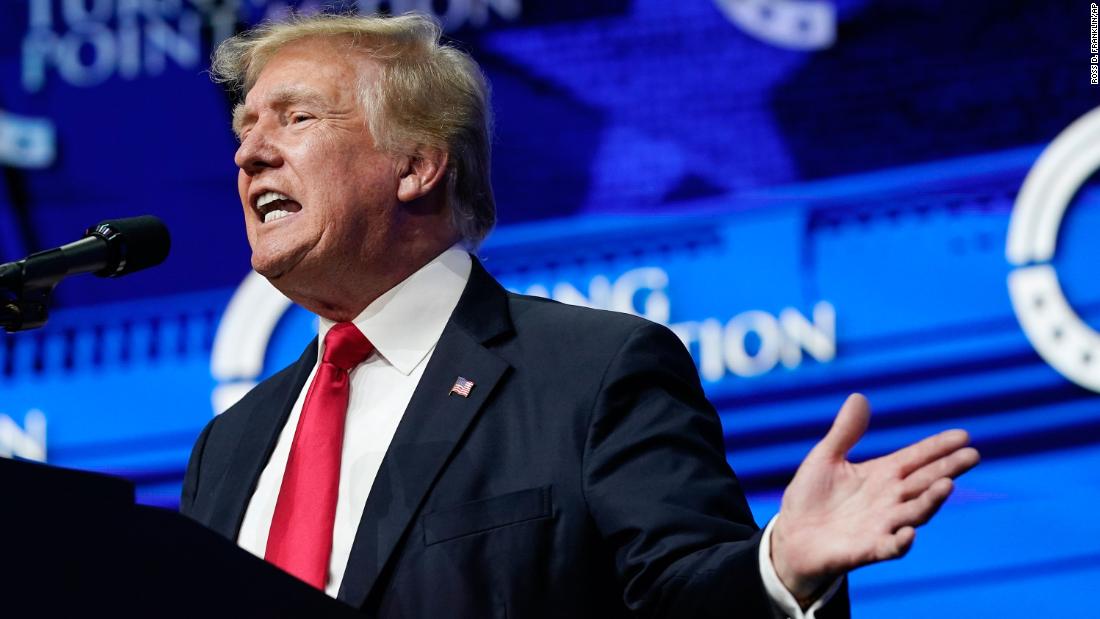 Former President Donald Trump’s legal team formally stepped into a long-running fight over a US House request for his tax returns, claiming Trump’s financial history is being unfairly pursued for political reasons by Democrats and seeking to end House Ways and Means Committee investigations into the ex-President and his companies.

The Justice Department last week determined that the Internal Revenue Service must hand over Trump’s tax returns to Congress, but a federal judge is still considering what could happen.

While the pressure is heating up in the House Democrats’ pursuit of Trump’s tax information, the tax returns aren’t likely to be given to Congress anytime soon – and the new filing from Trump will likely prompt several new rounds of legal arguments.

The move in court on Wednesday makes Trump a party in the lawsuit. For the past two years, his legal team was essentially on the sidelines as the House fought the case with the executive branch.

Trump is asking the federal court to permanently block the Treasury Department from turning over his tax returns and order Ways and Means Committee Chairman Richard Neal to “end all ongoing examinations” of Trump and his companies.

Trump’s team also seeks to recoup their legal expenses, according to their new filing.

“The primary purpose of the requests is to obtain and expose Intervenors’ information for the sake of exposure, to improperly conduct law enforcement, or some other impermissible goal – not to study federal legislation,” Trump’s attorneys argue in the filing on Wednesday. “Chairman Neal’s requests have always been a transparent effort by one political party to harass an official from the other party because they dislike his politics and speech.”

Last week, the Biden Justice Department reversed course from the Trump administration, saying the Treasury Department must turn over Trump’s tax returns when the Ways and Means Committee asks for them.

A federal judge, Trevor McFadden, who was appointed by Trump to the DC District Court, will be reviewing Trump’s claim in court and will likely set a schedule for more proceedings. There is also a three-day hold set by the court that would delay the IRS from turning over the tax returns immediately.

The court case dates back to 2019, when the House Ways and Means Committee sued the Treasury Department after the committee requested and didn’t receive the tax returns from the IRS. The House was asking for six years of Trump’s tax returns and other information related to the then-President personally, as well as eight of his corporate entities, including his Bedminster golf club and the trust that held his businesses during the presidency.

The Committee had requested the tax returns under a little-known section of US tax code that allows it to seek the returns of any American.

At the time, the Justice Department under Trump supported the Treasury Department ignoring the congressional request. The case in court was put on hold, amid several other standoffs between the branches of government.

The Ways and Means Committee has argued that it needs the tax returns to examine whether IRS audits of presidents are properly functioning – in line with the committee’s regular law-making responsibilities. This summer, Neal renewed his request for six years of Trump’s tax returns, citing the committee’s interest in the IRS’ presidential audit program and in making laws informed by Trump’s business entanglements, which were more extensive and shielded than any other modern president.

Generally, the federal courts can’t dictate how Congress goes about its fact-finding when it is working on legislation. Yet Trump’s side disagrees with what the House says it needs and its reasoning.

In this case, Trump has called the Ways and Means Committee’s arguments for the tax returns “a retroactive rationalization to help win this case.”

Trump’s lawyers also revive a refrain Trump has used for years to explain why he hasn’t released his tax returns, flouting the tradition of all other recent presidential nominees. They claim his taxes are still “the subject of ongoing examinations by the IRS” and that work on its own is “trial-like,” according to the filing on Wednesday. Trump’s lawyers argue the IRS could be influenced by Congress looking at their officials’ work on Trump’s taxes–a possible violation of his constitutional right to due process.

This story has been updated with additional details.