“Yes, it’s summer, but this type of heat can kill.”

A stark reminder from the National Weather Service, as dangerous heat envelopes the East and West coasts through the start of the weekend, placing nearly half the country under heat alerts and potentially breaking daily record temperatures.

“‘The Pacific Northwest and Northeast can expect daily record highs to be broken both Thursday and Friday while even more locations have a better chance to observe daily record warm minimum temperatures,” the Weather Prediction Center said.

Check the forecast high where you live

“Today features numerous Heat Advisories and some Excessive Heat Warnings from the central Plains to the Northeast. Heat indices in these areas will range between 100-110 degrees with some locations as high as 115 degrees,” the WPC said.

Around 195 million Americans are under a watch/warning/advisory for dangerous heat. Yes, it’s summer, but this type of heat can kill. Avoid strenuous activity during the midday, and bring along extra hydration, even if just going about normal business. https://t.co/asAP0ZR0oK pic.twitter.com/v3NXefjLmy

Pacific Northwest faces another round of dry heat

The heat is on across the West Coast, centering on the Pacific Northwest once again. Temperatures in the region are forecast to climb 15 to 25 degrees above average with hot and dry heat lingering through the start of the weekend.

“Temperatures on Thursday will even challenge some daily record highs in the Northeast and the Pacific Northwest,” the WPC said.

Seattle will be in the mid-to-upper 90s Thursday and Friday and Portland could even hit 100 degrees through the end of the week. This will make for especially dangerous conditions in a region where many don’t have air conditioning. 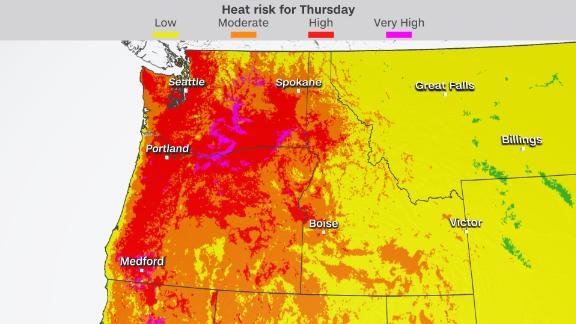 It will be the second major heat wave in the Pacific Northwest this summer. In June, all-time record temperatures fell by the wayside as cities like Seattle soared to 108 degrees, while Portland baked under an oppressive and unprecedented 116 degrees. Hundreds more emergency room visits for heat-related symptoms and deaths than usual were reported during that period.

Many may be headed to the water to seek relief from the heat, but in doing so, they could face a new danger.

“Warm air doesn’t always mean warm water in lakes, streams or oceans. Fifty five degree water may not sound very cold, but it can be deadly. Plunging into cold water of any temperature becomes dangerous if you aren’t prepared for what the sudden exposure can do to your body and brain,” the NWS warns.

Body heat is lost 25 times faster in cold water and can quickly result in hypothermia. In the coastal regions of the Pacific Northwest where hot temperatures are uncommon, many people flock to the shores.

Planning on heading to the water to cool down? Cold water, even when it is so hot outside, can still kill. Remember to grab your life jacket, if you go in the water swim with a buddy, & know the signs of hypothermia. #ORwx #WAwx #PNWHeatWave pic.twitter.com/Nv4FpJF249

Higher air temperatures increase the chance of cold shock when entering the water, which can lead to muscles stiffening and drowning.

Seattle’s record for the most consecutive days at 95 degrees or higher is four, and if this week’s forecast holds, it will reach five.

On the other coast, heat alerts span the Northeast from North Carolina to Maine through the end of the week.

Highs in the 90s with relative humidity values launch heat indices into the triple digits bring a sweaty, stifling heat that could break daily records.

Excessive heat warnings include the major cities of Philadelphia, New York, and Boston through Friday. Actual temperatures in New York will be in the mid-90s and not drop below 90 for a high until Saturday. Washington, DC, could hit 100 degrees on Thursday and not see high temperatures get below 90 until Sunday.

“A multiple-day stretch of oppressive to dangerous heat and humidity continues today, expected into at least Friday. Today will be the most dangerous in terms of the heat and humidity with heat indices forecast to be as high as 109 degrees,” NWS Boston said Thursday.

Moisture in the region will make relative humidity values soar, and make the hot weather feel even hotter.

“The primary concern tonight is the lack of relief from the heat. Portions of Philadelphia may not drop below 80 degrees,” said NWS Philadelphia Thursday.

Lingering heat overnight can be dangerous and deadly, increasing the chances of heat-related illness.

“This is a problem because these temperatures don’t allow the body to successfully cool down at night,” said CNN meteorologist Allison Chinchar. “The temperature needs to drop to at least 80 degrees for recovery to begin. In fact, a person can lose up to 2 liters of fluid overnight through sweating if the temperature doesn’t drop below 85 degrees.”

The coastal heat waves come after a summer wracked with record-breaking heat. Heat waves aren’t out of the ordinary, but the magnitude of the recent events has climate scientists warning of what is to come.

Heat waves are getting hotter because of the climate crisis. With 2 degrees Celsius of global warming, the hottest temperatures would reach nearly 3 degrees Celsius (5 degrees Fahrenheit) higher than previous heat waves.

Scorching in the South and Midwest

The Mississippi River Valley will also face temperatures in the upper 90s for the next several days, with heat indices feeling like 110 in some places.

The heat index factors in humidity with temperature, creating a “feels like” temperature. The human body produces sweat when it heats to cool off, the moisture evaporating and cooling the skin. But when conditions are excessively humid, the sweat has trouble evaporating and it feels hotter.

St. Louis and Kansas City are both included in excessive heat warnings on Thursday due to heat index values climbing into the triple digits. The nearby Midwest regions have heat advisories in place, where the urban heat island effect is less intrusive.

Neighborhoods with little tree cover, few grassy areas and a lot of concrete can be as much as 15 to 20 degrees hotter than the surrounding areas.

Kansas City will see “Dangerously hot conditions with heat index values up to 110 degrees,” according to the National Weather Service. Overnight lows are forecast to linger in the low 80s, giving very little relief to the relentless heat.