There’s a scene in the very first episode of HBO’s critically acclaimed prestige drama, “Succession,” that is about as viscerally unsettling to watch as a Jigsaw death trap in a “Saw” film.

The pilot sees the media magnate Roy family – an amalgam of the Murdochs, the Hearsts and other dynasties – decide to play an impromptu game of softball. A boy and his family watch nearby, and when youngest son Roman Roy notices them, he brokers a deal with the boy: If the kid can score a run, Roman will pay him $1 million. It’s chump change for Roman – he’s got the nasty swagger of someone fully aware of their privilege and willing to wield it like a weapon – but the funds could radically change the boy’s family’s life.

The boy swings and sends the ball soaring. He darts around the bases and almost – almost – slides into $1 million when Roman’s soon-to-be brother-in-law tags him out with disturbing zeal.

“That is so sad,” Roman tells the kid, keeling over in laughter. The Roys leave the field and return to their Manhattan empire. The boy is left embarrassed.

It’s perhaps the hardest-to-watch scene in a series whose de facto protagonist kills someone in a car accident (and is still, somehow, a hero).

We detest the Roy family in “Succession,” and yet we watch, rewatch and pick apart the series after each episode. We uncomfortably laugh at Jennifer Coolidge’s deluded socialite has-been in “The White Lotus,” fawn over the fashion worn by the bratty, uber-rich kids in “Gossip Girl” and fear the wrath of girlboss Laura Dern in “Big Little Lies.” Yet we still keep watching, often cringing our way through. Such series confirm our worst suspicions about the wealthiest among us – but the characters’ fictional riches and all the accompanying baggage makes for riveting television. (HBO and HBO Max – home to shows such as “Succession” and “The White Lotus” – share parent company WarnerMedia with CNN.) 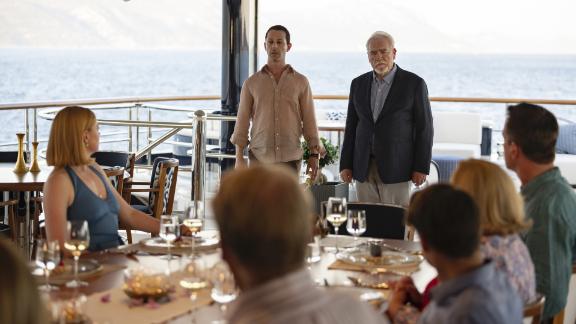 Graeme Hunter/HBO
The Roy clan of “Succession” have exorbitant wealth — success that has come by stabbing each other in the back for decades.

As much as as we’re subjected to these characters’ terrible behavior, we’re also treated to visual feasts of mega-yachts meandering through the Mediterranean and a curious whale splashing its tail under a Maui sunrise. We’re meant to dislike the carelessness and cruelty on display, while also enjoying the luxuries these fictional characters’ money can buy.

It is the American dream, after all, to ascend to a higher socioeconomic status than that which you were born into. But what the best shows about the rich get right is letting them eat cake, then squashing it.

Drawing viewers into the uber-rich lifestyle

“The White Lotus,” which quickly became this summer’s must-see TV, is a spiky satire that mocks whiteness, imperialism and one-percenter ennui by centering on people with more than enough money – and a tragic nearsightedness that stops them from doing anything meaningful with it. It’s at once heartbreaking, entertaining and infuriating.

Take, for example, Coolidge’s haunted alcoholic Tanya. There are more despicable characters than hers – one Ivy League trust fund kid hellbent on revenge is particularly unlikable – but Tanya is almost more dangerous because she’s oblivious to her own selfishness. More than once, she floats the idea of funding a wellness center run by beleaguered spa manager Belinda (Natasha Rothwell), but just as quickly abandons the idea to compliment a wealthy family or complain about a vacation fling. She speaks as though she’s sleepwalking through her privileged life, blissfully unaware of the people she steamrolls as she moves. 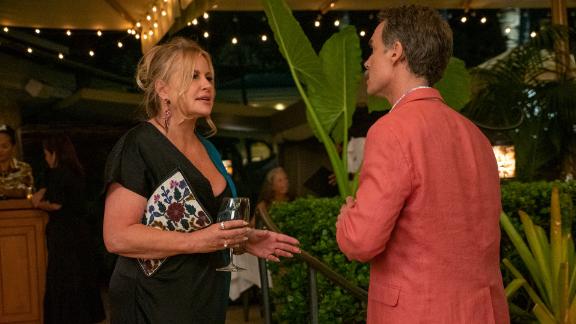 Despite focusing on the uber wealthy, both “White Lotus” and “Succession” bring viewers in via outsider characters who don’t fully fit that category: In “Succession,” viewers are brought into the Roys’ world by also experiencing the journeys of affable Cousin Greg and his power-tripping, beta-male boss, Tom Wambsgans. In “The White Lotus,” those tuning in also see events through the eyes of struggling journalist Rachel, icy frenemy Paula and overworked spa manager Belinda. The average viewer can relate to these characters, while witnessing the actions of larger-than-life figures at the center of the story.

That said, the insidious nature of wealth is more subtle in “The White Lotus” – if not more familiar to audiences. Chances are, many of us have encountered a pompous collar-popper like Jake Lacy’s Shane or an oblivious White man who bumbles through a defense of his privilege like Steve Zahn’s Mark. These are people who are high-powered in their own spheres, whose familial strife may not move markets but can still devastate bystanders. In that way, they’re almost more detestable than the Roy family of “Succession” – fans may have experienced the type of pain the characters of “The White Lotus” have wrought firsthand.

White said as much about “Succession” in an interview with the New Yorker.

“It’s a great show, but it’s very king’s court. You can kind of otherize them. They’re billionaires,” he said. “With ‘White Lotus,’ I wanted it to be more, like, this is your next-door-neighbor rich person who is part of the system.”

Little by little, the outsider characters find themselves engaging further with the wealth and status of their associates, drawing viewers in just the same.

It’s very American to be fascinated by the wealthy

There was a time when sitcoms that centered around working-class families like “Good Times” and “Roseanne” reigned supreme. A Vulture timeline of working-class sitcoms notes that these series were especially popular during the ‘70s and the late ‘80s, periods of slow economic growth (and accompanying disillusionment).

But as time went on, wealthier families also came into focus: “The Jeffersons” focused on a Black family enjoying a newly prosperous life. The soap opera “Dynasty” followed the dramas of an oil magnate’s extended family. “Beverly Hills 90210” featured rich, clueless teens who, despite their status, suffered just like the rest of us. Those series weren’t always critically acclaimed, but they were widely watched.

HBO has become the primary purveyor of critically acclaimed dramas and satires about one-percenters and the harm they dole out (see also: “Big Little Lies,” its soapy sibling “The Undoing” and the Gen Z revival of “Gossip Girl,” among many others). Many of those series are routinely acclaimed by critics and dissected on podcasts, web series and in articles like this one. But their success is reliant most of all on an audience curious about the lives of the 1%. 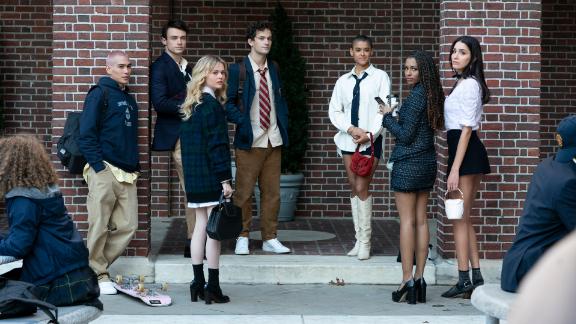 Karolina Wojtasik/HBO
The characters of HBO Max’s “Gossip Girl” reboot are no less status-obsessed than the stars of the original.

The American fascination with wealth is natural, given the importance our culture places on upward mobility and achievement, said June Deery, a professor and department head of communication and media at Rensselaer Polytechnic Institute.

“The great mythology of the American Dream encourages people to think they can aspire to be wealthy in their lifetime, so they may think they are viewing a future projection of their own situation,” Deery told CNN in an email.

Deery has written at length about reality TV and “wealth voyeurism,” particularly through the lens of Bravo’s “Real Housewives” franchise. The women on the series are particularly compelling because, in most cases, the women are members of the “nouveau riche,” or “new money,” Deery writes. They weren’t necessarily born into wealth and status like the fictional Roy family, so their way of expressing their wealth and status is often overstated, evidenced by name-dropping famous acquaintances and adorning themselves in designer emblems.

Our reactions to such series depends a lot on our own socioeconomic status, Deery said, but our impressions typically fall between admiration, disdain or a blend of both. We may, for example, laugh at how ridiculous it is that Upper East Sider Ramona Singer scoffs at any event that takes her below 59th Street or her insistence on wearing heels to the airport – but we still envy her for her mansion in the Hamptons and a comfortable financial status that allows her to spend much of the pandemic in luxurious South Florida.

“It is easier to satirize and laugh at the vulgarity and extroversion of the nouveau riche than at the restraint of old money perhaps,” Deery told CNN. “It certainly seems like the Real Housewives are often set up to be mocked. Yet some viewers still write online about admiring them, envying them, almost worshipping them.”

Television reflects and reinforces the importance of wealth, said Jim Burroughs, a professor who leads a master’s program in global commerce at the University of Virginia and studies materialism.

“People would be materialistic without TV,” he said – noting that France’s extravagant Palace of Versailles predates TV and film. But watching so much content about the lives of the rich influences the value we place on material things and personal wealth, he said. 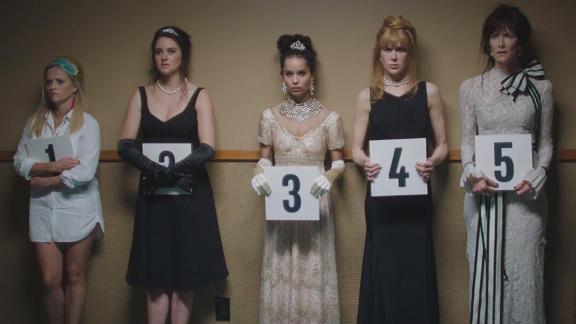 It’s less clear, he said, why we’re equally repulsed by and drawn to these characters, though he speculates it has something to do with social comparison: We compare our own actions to those around us, for better or for worse, and adjust our behaviors accordingly. We may be disgusted by the behavior of the wealthy people we watch while subconsciously coveting all that they have, he said.

“I don’t believe these feelings are mutually exclusive,” Burroughs said. “I think you can admire what someone has, but also be jealous of what they have as a result of these implicit comparisons to yourself. So when you see the ‘real housewife’ who drives a Bentley you can simultaneously admire her and resent her” – and maybe, he said, cheer when she falls.

Even when they feature “outsider” characters, series about the uber-rich are not meant to be relatable. For one, they almost always focus on White people. (Vanity Fair’s Delia Cai wrote earlier this week that “all-white casts and storylines can be considered tacky, unless it’s all in service to making fun of white privilege. Then it’s not only okay – it can be extremely funny.”) The shows often sideline people like service workers, house staff and the other dozens or hundreds of people in the wealthy protagonists’ orbit who keep their businesses afloat – but if the characters don’t bother to learn their staff’s names, the audience won’t either.

The lives we see on TV – in fiction and reality series – are heightened for entertainment purposes, Burroughs noted. Shows are edited to “portray an extremely slanted view of reality,” he said, be it through the constant jetsetting of the “Real Housewives” or the prevalence of weeknight parties and underage martini drinking in “Gossip Girl.” These heightened elements can distort our view of what affluence really is, he said.

And even when series are clearly poking fun at their characters, it’s possible that audiences can miss the point of even the strongest satire. Lines blur, and the voyeurs are enthralled suddenly by the lifestyle rather than the consequences of living that way, Burroughs said.

Perhaps the best argument against celebrating the lifestyle of the TV elite lies in Tanya on “The White Lotus,” whose bizarre behavior suggests that she’s the main character in a series in her mind. She doesn’t dwell very long on the lives of others. She’s mostly removed from the action, living in her own bubble of sadness. It’s hard to envy anything about Tanya’s disastrous personal life and profound loneliness, even if it does land her at a luxury resort. She epitomizes one of the series’ main takeaways: Having it all – even vacationing in Hawaii – won’t save you from your own misery.