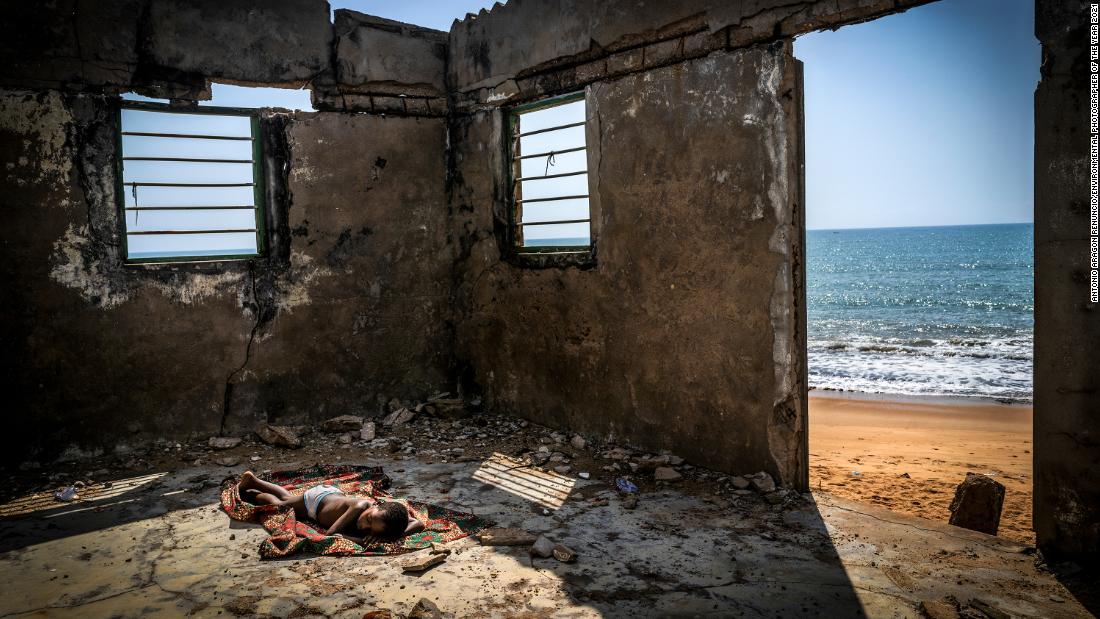 (CNN) — A child sleeps in the ruins of a home eroded by rising sea levels on a beach in Togo.

This haunting image, the work of Spanish photographer Antonio Aragón Renuncio, was intended to highlight a problem faced by many West African countries and has scooped the first prize in this year’s Environmental Photographer of the Year awards.
The 14th edition of the contest, whose winners were announced Monday at the COP26 Climate Summit in Glasgow, saw almost 7,000 entries from 119 countries and was organized as a collaboration between environmental charity CIWEM, environmental streaming platform WaterBear and camera maker Nikon.

“I’m very happy. It’s a huge honor to win such an important prize,” Aragón told CNN. “Especially one that’s related to the environment, which is a topic I’ve been working on for several years and which I’m very worried about.”

“It was strange that every time I passed through the capital of Togo, Lomé, in the beach zone and towards the airport, I noticed each year that the road was closer to the water,” he said. “I realized that it was a serious problem… and I think it’s a story very few people know about, and very few people have told.”

Delhi-based photographer Amaan Ali took home the Young Environmental Photographer of the Year award for his image of a boy fighting forest fires on the banks of the Yamuna river near his home.
Among the other winners were Italian photographer Michele Lapini, who captured a house submerged by floods in the Po Valley, and Bangladeshi photographer Ashraful Islam, who highlighted the effects of extreme drought on sheep desperate for grass.

Meanwhile, Kenya’s Kevin Ochieng Onyango won in the “Climate Action” category for his chilling depiction of the future of climate change, showing a child breathing in oxygen from a plant while a sandstorm brews in the background.

Indian photographer Sandipani Chattopadhyay and Italian Simone Tramonte rounded out the category winners, with their portrayals of irregular monsoons causing algal blooms and of an Icelandic photobioreactor, respectively.

The winning images are being shown alongside a selection of other photos at a COP26 exhibition. The climate summit began on October 31 and will end on November 12.